Images from filming “The Sludge of Nanjido” in Seoul in spring 2017. 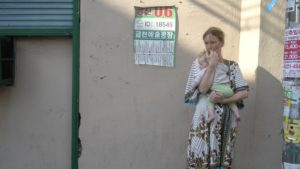 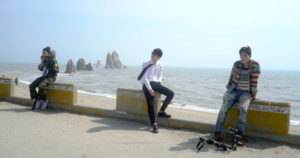 KURDANAYE SITE FOR HEALING – an installation at SeMA Nanji Seoul. 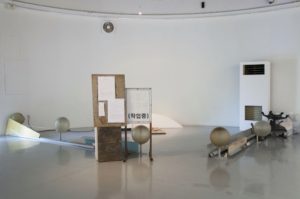 Meditating on the meaning of territory, nationhood and trauma of the self, Shamriz re-imagines a 5th century Kurdanaye religious site for healing and appropriates it for contemporary setting within an art gallery. This parallel duality of irony and spirituality is a site-specific variation on the artist’s idiosyncretic cinematic language that often combines these two contradictory elements within the framework of a performative experience. It alludes to very contemporary concerns as travel bans, globalization and surveillance at the same time that it conveys a timeless spiritual simplicity. In an act of somewhat defiance against a current zeitgeist, to experience the site’s spiritual property the visitor is obliged to avoid witnesses and the truthful sharing of his experience. The only permitted and possible account of the visit is a false one. In addition, a set of three rules determines who is eligible to enter the territory – a person who hadn’t committed murder in the last three years, physical assault in the last month and who hasn’t been in the area of the Western Roman Empire.

Read the story behind the installation and its special set of rules here.